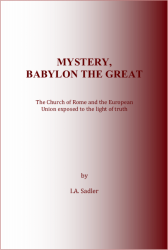 Book - Mystery, Babylon The Great by Dr Ian Sadler -The Church of Rome and the European Union Exposed to the Light of Truth-

This book is written as a warning to the Christian churches of the danger of the false religion that originated at Babylon. The true successor to the Mysteries of Babylon is shown to be the Church of Rome; but other strands of the Mysteries, such as the Occult, are also exposed. The author takes the classic Reformed position regarding the papacy and its fulfilment of Scripture concerning the "man of sin".

Many in this day do not appreciate to what extent error has crept into the professing churches and the nation. The conclusions of the book are very solemn indeed, but the athor believes they are most needful at this time. May the reader prayerfully consider the evidence and warnings given. May grace be sought of God to stand fast in the true faith in Jesus Christ. The book seeks to follow the Scriptural pattern of exposing the errors of false religion, without defiling the reader with all the abominable details of Babylonish worship.

Dr Ian Sadler, BSc, PhD, DLit, is a member of a Strict Baptist church. He trained as a research scientist, but currently works in the field of health and safety. He is married with a young family. He was awarded an honorary Doctorate of Literature in October 2000 by the European Theological Seminary in recognition of the first edition of Mystery, Babylon The Great.