Book - Lead Me To The Father by Derek Robert

* Workbook - Breaking the Chains of Freemasonry by...

* Workbook - Breaking the Chains of Fatherlessness... 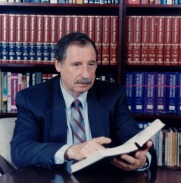 Dr. Harold Dewberry, who was promoted to glory on the 22nd July 2015, was recognised around the world as an apostle, prophet, teacher and author. His ministry continues through his teachings by books, and video as well as in the lives of those who have been radically changed to live as overcomers in Messiah Ye'shua.

Dr. Harold was raised in a dysfunctional family; the result of this left his inner man crushed and lifeless. In 1959 he was Born Again and experienced a powerful deliverance from alcoholism. As he sought Father Yehovah for the keys to healing and freedom from bondage his ministry to others began.

Armed with the message of restoration and hope he founded and directed Teen Challenge in Sydney, Australia. During this period he saw hundreds of people released from mental and physical problems. He began to train many pastors and lay workers in rehabilitation work through the establishing of drop-in centres and citywide helplines.

The apostolic ministry of Dr. Dewberry quickly developed and he began to travel and conduct seminars and lectures in Bible colleges and universities. Some of the major television networks in Sydney conducted interviews and a nationwide radio program was launched. In the United States he made several guest appearances on TBN TV channel as well as the 700 Club.

His desire was to see the Body of Messiah restored to wholeness and effectively trained in caring for the soul. To fulfil this burden and calling, Dr. Dewberry became the Senior Pastor of En Agape Christian Fellowship in Southern California, and established a residential care and training centre which ran for many years.

The residential program became a unique model for pastoral care and provided crisis intervention for many people who had been given a poor secular prognosis of recovery from emotional, physical and personality disorders.

Dr. Dewberry traveled extensively, impacting the continents of America, Europe, Australasia, Africa, and the South Pacific Region. EnEgape Fellowship continues to  provide apostolic covering to over two hundred churches throughout the world, under the oversight of Senior Pastor Anthony Dewberry.

The ministry of Dr. Dewberry also continues, both in the United Kingdom and Europe, through the Dewberry Institute of Healing and Ministry, under the oversight of Pastor and Evangelist, Derek Robert.