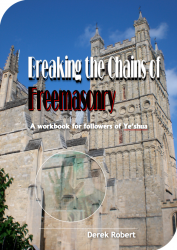 With over 550 renunciations this is the most comprehensive workbook available for breaking Masonic and Witchcraft curses, both generational and self-inflicted. With a 'to-the-point' attitude to the subject, this is the essential workbook  that will leave you with a feeling of freedom from the dark curses of Freemasonry.

Derek's style of writing is easy to follow, and as he effectively leads you by the hand he walks you into your freedom. Even those with no experience of deliverance will find they can easily work through this book. He addresses a number of issues that we have found are an impediment to freedom. For that reason there is teaching in the area of how to forgive, (no forgiveness, no freedom) the severing of soul-ties, especially in the area of past sexual sin. Why? The god of Masonry is a sex god called the Baphomet, and any past sexual sin, even generational can be a blockage to freedom. Masonry is obsessed with the phallic, and with male domination, hence is a strong root to misogyny, (hatred of the woman you love, so your wife is the one to ask if you need to deal with this) and sexual bondages.

Masonry is also a strong root to bitterness, which in turn is a major root to Cancer and other terminal conditions. Hence we have so many testimonies of healing and deliverance from terminal illnesses.

Each and every Masonic blood oath is specifically addressed and renounced and much, much more.

Because the teaching on these foundational issues is rarely taught in mainstream churches, this workbook becomes an important tool for counsellors and pastors alike.

With a 'to-the-point' attitude to the subject, this workbook has essential prayer strategies with over 550 renunciations that will leave you with a feeling of freedom from the dark curses of Freemasonry.

Authors Note: In this sixth edition of my workbook I have mostly used the Hebraic names and titles including within Scripture quotations. Soon after the year 2000 I became aware that some of my delegates had been programmed through abuse, to react in specific ways of defence, to the name of Jesus. When facing resistance we would sometimes pray: “In the name of Jesus Christ of Nazareth who came in the flesh.” This helped, but when we began to pray in his Hebrew given name and title, Ye’shua the Messiah we found more power and more break-through.

More importantly for me today, it is more honouring to call our Saviour by the name given by the Father, than by his Roman Catholic nickname, Jesus. Jesus was not the name given by the Angel of Yehovah and Christ is not his surname, i.e. he was not born to a Mr & Mrs Christ. His Hebrew name, as given by the Angel of Yehovah in full, is Yehoshua, which when shortened is Ye’shua. Christ is the Greek word for Messiah, which itself is a title and not a part of his name. Further, he was not Greek but Jewish. I have used the English translation Messiah. Where I have used his English/Roman Catholic nickname, Jesus and Greek title Christ, this is because that is the way his name is expressed in the context of my subject matter or renunciation.