Workbook - Breaking the Chains of Freemasonry by D... 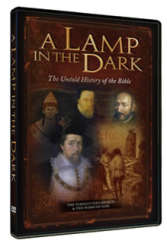 DVD - A Lamp in the Dark

The untold history of the Bible

A Lamp in the Dark is an exciting new documentary that unfolds the fascinating "untold" history of the Bible, revealing critical information often overlooked in modern histories. Enter into a world of saints and martyrs battling against spies, assassins and wolves in sheep’s clothing.

Throughout the Middle Ages, the Papal Inquisition forbade biblical translation, threatening imprisonment and death to those who disobeyed. Learn the stories of valiant warriors of the faith, such as John Wycliffe, William Tyndale, Martin Luther, the ancient Waldenses, Albigenses and others who hazarded their lives for the sake of sharing the Gospel light with a world drowning in darkness.

Once the common people were able to read the Bible, the world was turned upside down through the Protestant Reformation. The Reformers subdued whole kingdoms by preaching the grace of God, and exposing the unbiblical doctrines of Rome. In response, the Vatican would launch a Counter Reformation to destroy the work of the Reformers, including the bibles they produced.

A Lamp in the Dark was filmed on locations in England and Belgium, and features never before seen interviews with leading Bible scholars, including David Brown, Roger Oakland, Alan O’Reilly, D.A. Waite and others. Also included are chief curators from the British Library in London, Erasmus House in Belgium, and the William Tyndale Museum in Vilvoorde, where Tyndale himself was burnt at the stake.

Included in this 3 hour DVD:

The history of the early Church, with the warnings from Jesus and the Apostles about "grievous wolves" and apostasy.

How the Inquisition began for the purpose of silencing Christians and outlawing the Bible.

The Bible translations of John Wycliffe and William Tyndale, the Great Bible, the Geneva Bible, and finally the King James Version.

The Protestant Reformation and the reasons behind it.

The Counter Reformation which began with the founding of the Jesuit Order in 1540.

The Vatican’s involvement with the Critical Text and their influence over world-wide biblical translation in the 20th century.