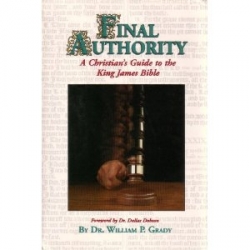 Final Authority exposes the deceit behind many of the common charges leveled against the A.D. 1611 Authorized Version. For instance, having heard of the "inferior scholarship" of the King James translators, one discovers that Dr. John Bois, chairman of the Old Testament committee at Cambridge, was reading and writing Hebrew at age six.

With the fourth-century codices Vaticanus and Sinaiticus being recommended as the two most reliable manuscripts worthy of supplanting the time-honored Textus Receptus, the reader learns the facts of their defective character which reveal their disagreement with each other in over 3,000 places in the Gospels alone.

Having been advised that Mark 16:9-20 should be discarded because it is not found in the "best" manuscripts, the author finds that the actual evidence confirms its mysterious presence in 618 manuscripts while missing in only two, Vaticanus andSinaiticus.

After hearing the scholars Westcott and Hort venerated as spiritual giants, he becomes acquainted with their personal correspondence in which they endorse evolution, socialism, globalism, disarmament, spiritism, purgatory and communal living while deprecating the inspiration of Scripture, salvation by grace, a literal Heaven and Hell and the United States of America.

In short, Final Authority addresses those issues rarely discussed by critics of the King James Bible. As well as the information given above, the reader will learn the following: